Thor: The God Who Fell to Earth 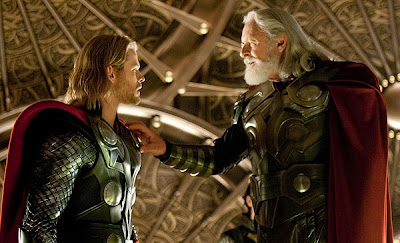 Marvel Entertainment is selling you something in Thor, and it’s not the movie you are watching, but the five other films that are coming out soon. Did you hear that reference to “Stark Industries”? Iron Man 3 in 2013! See Jeremy Renner as Hawkeye? He’s gonna have his own movie. And of course an after-credits sequence is setting up the big-bang-mash-em-up epic of The Avengers next year, which will bring together every super hero in the Marvel universe for one big extravaganza (read: most likely disaster).

But until then, we have to actually get through Thor, perhaps the most unique character to join the Marvel universe alongside the science-built Iron Man and Incredible Hulk. A Norse God who comes from the magical kingdom in a parallel world (or something) called Asgard, Thor is unstoppable and wields awesome power with his magical hammer, Mjölnir. And thus Thor must be equipped with super human strength, played here by a pair of gigantic biceps, attached to the smirking face of Chris Hemsworth. Directed by Shakespearean thespian Kenneth Branagh, Thor is a mediocrely good time, which shows how much our standards have lowered for this type of entertainment more than the passable merit of the film. 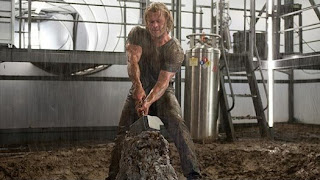 Thor, playing heavily on some George Bush parallels, desires to destroy the Ice people once and for all and teach them a lesson after they attempt to steal a glowing block from Asgard, When his foolish attack leads him to trouble, Odin banishes him to Earth until he can learn to be a responsible adult. Thus starts the only serviceable part of the film, where Thor’s fish-out-of-water status makes for great banter between himself and his earthling companions, an astrophysicist played by Natalie Portman, her silly intern played by Kat Dennings, and the one Nordic actor in all of Hollywood, Stellan Skarsgard. Ms. Portman, given little character and even less purpose, looks confused and amazed, but it’s Ms. Dennings’s wit and charm that steals each scene. 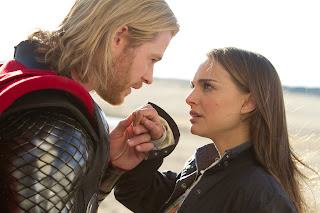 The Earth bound section also makes for the film’s single entertaining action sequence, where Mr. Hemswroth’s muscles take on a series of inept government agents. The lack of CGI focus on stunt choreography make for some enticing action, and is sorely missed when Thor regains his powers and allows the magic of computers do the work for him. The whole thing comes down in a climatic sequence so boring and so devoid of life, one would wish Thor were solely a comedy, and required no action.

Nothing in Thor is particularly terrible, though nothing is noteworthy at all. In a way it commits the mortal sin of being particularly boring without inciting incident either way. Say what you will about a train wreck like Zac Snyder’s Sucker Punch, but the complete disaster of that film was a fascinating look at what never to do in films. Mr. Branagh, perhaps only brought in because Thor’s narrative plays some poorly constructed parallels to Shakespeare, seems to let the Marvel machine takeover, as the cogs provide fan service. Thor may be able to fly, but nothing in this film particularly takes off.
Credit must be given where credit is due though, and the three screenwriters—Ashley Miller, Zack Stentz, and Don Payne—have more or less successfully integrated the magical realm with the science realm to make Thor a believable character. What isn’t believable though is the ridiculous world he comes from. Draped in golden CGI and lifeless gigantic complexes, Thor, like all other action films that look only to Spielberg for inspiration, has Daddy issues, here exemplified by King Odin, played by Anthony Hopkins and always dependable to scream and shout in these sort of situations.
Posted by Peter Labuza at 12:21 PM 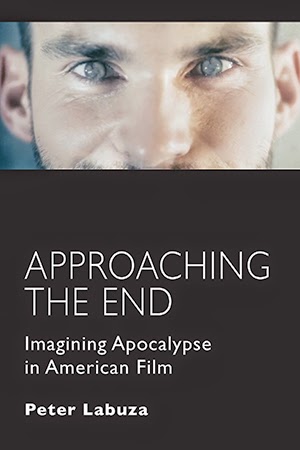 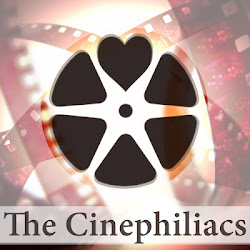 Peter Labuza is the host of The Cinephiliacs and the author of Approaching The End: Imagining Apocalypse in American Film. He has contributed to Variety, Reverse Shot, Little White Lies, Indiewire, The Playlist, In Review Online, and Press Play. He serves as an editor for To Be (Cont'd), a columnist for The Film Stage, and a booklet editor for the UK Blu-Ray distributor Masters of Cinema. He is a PhD candidate at the University of Southern California in the Critical Studies department where he is focusing on the late studio period of Hollywood between 1959-1966. Previously, Peter earned both a BA and an MA in Film Studies from Columbia University in New York City.
Here at this blog, he collects links to his various writing, and posts other things of interest when he has the time and passion. Day to day, you can find him either chatting away on Twitter or writing brief thoughts on films on Letterboxd. He lives in Los Angeles and is often found roaming the city's various repertory theaters. You can reach Peter by email (plabuza@gmail.com) for possible writing/podcast opportunities that may interest him.